Perhaps 80 percent of enslaved children were born to two-parent families—though the mother and father might live on different plantations—but in extant slave-traders’ records of those sold, according to Michael Tadman’s analysis, “complete nuclear families were almost totally absent.” About a quarter of those trafficked southward were children between eight and fifteen, purchased away from their families. The majority of coffle prisoners were male: boys who would never again see their mothers, men who would never again see wives and children. But there were women and girls in the coffles, too—exposed, as were enslaved women everywhere, to the possibility of sexual violation from their captors. The only age bracket in which females outnumbered males in the trade was twelve to fifteen, when they were as able as the boys to do field labor, and could also bear children.

Topics : The American Slave Coast: A History of the Slave-Breeding Industry Quotes

Download
It is in no small part to Henry’s resistance that the Constitution owes the Second Amendment in particular—the one that promises “the right to keep and bear arms” in order to have “a wellregulated militia”—and it too was, in part, about slavery, because in the South, the . . . Read more 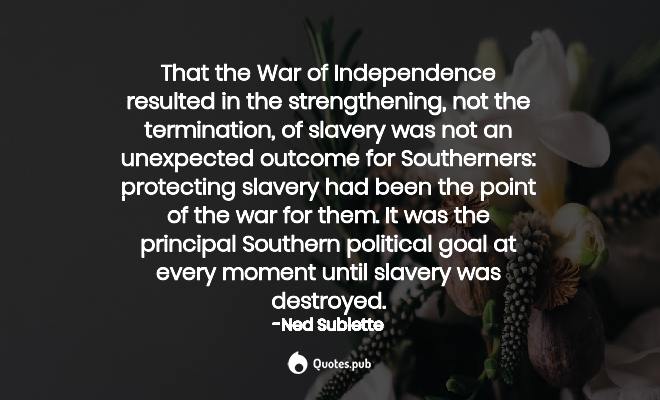 That the War of Independence resulted in the strengthening, not the termination, of slavery was not an unexpected outcome for Southerners: protecting slavery had been the point of the war for them. It was the principal Southern political goal at every moment until slavery was destroyed.

Download
Twenty-two-year-old Ona Judge, who was Martha Washington’s personal servant, escaped from the President and First Lady of the United States in Philadelphia in 1796 after learning she was to be given away as a wedding gift. She married a free black man in Portsmouth, New Hampshire, a . . . Read more

Much like a house mortgaged to a bank today, mortgaged slaves were security for those who put up the money for the mortgage, to whom the slaves were “conveyed.” A mortgage financier might be a merchant, a church with an investment portfolio, a college, a bank, or, commonly, a weal . . . Read more

Nor did enslaved women have legal protection against sexual abuse from enslaved men. In the 1859 case of George v. the State of Mississippi, in which an enslaved man was accused of raping an enslaved female child, the Mississippi supreme court noted that “a slave can only commit rap . . . Read more

In particular, three slaveowning politicians loom large in our narrative as principal enablers of the territorial expansion of slavery and, consequently, of the slave-breeding industry: Thomas Jefferson, Andrew Jackson, and James K. Polk—a Virginian and two Tennesseans. All three we . . . Read more 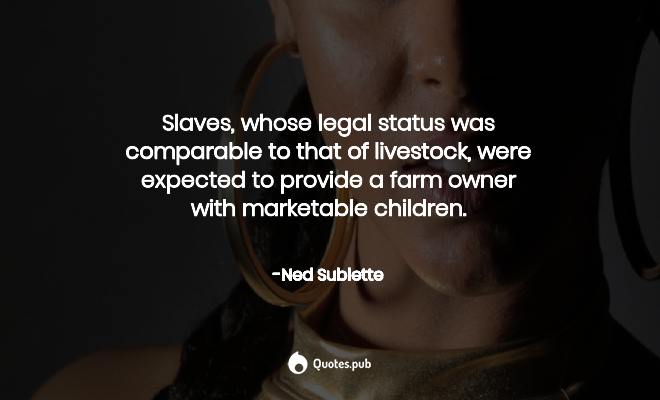 Slaves, whose legal status was comparable to that of livestock, were expected to provide a farm owner with marketable children.