Finally, when she was shaking so much that he staggered with the violence of her pleasure, he drove her back against the wall and took her as she stood, careless of the clothes that bunched between them, oblivious to everything but the primitive, driving force that had conquered him far more devastatingly than he had conquered her.

She wasn’t aware of the rip he made in the back of her dress when his shaking hands wrenched the zip down, only of the molten sensuality of his gaze as he steered her into a shaft of light near the window and studied her breasts, nestled in their cups of pure white lace. ’Swee . . . Read more 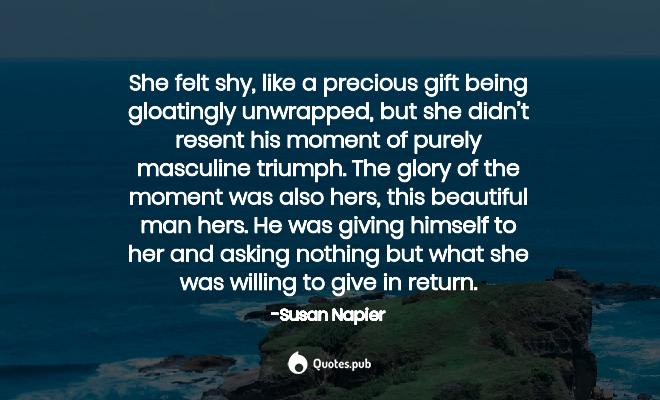 She felt shy, like a precious gift being gloatingly unwrapped, but she didn’t resent his moment of purely masculine triumph. The glory of the moment was also hers, this beautiful man hers. He was giving himself to her and asking nothing but what she was willing to give in return.

Download
Scott stood by the bedside, looking down at her. Then he spread his hands, revealing the fine tremors there.‘Look what you do to me. You make me weak.’ Grace reached out a hand and touched his ridged stomach. ‘You’re the strongest man I know,’ she said softly, feeling th . . . Read more

The taste of him exploded inside her mouth, filling her senses with an intoxicating warmth and aroma that had nothing to do with the amount of brandy he had consumed. He made sounds-rough, greedy, indistinct sounds that vibrated through her tissues, his lips and teeth and tongue consu . . . Read more

Use me, Grace. If that’s what we’ve been doing so far, I love it. I want to be used. Now.’ He stretched, a long ripple of pure muscle as he invited her in a throaty purr that wrapped itself around her heart and drew her irresistibly towards him, the craving stronger than anger o . . . Read more

Her mouth trembled and parted and she began to gasp in light, shallow breaths that made her flushed breasts quiver deliciously, invitingly… He bent and touched a stiff pink nipple experimentally with his mouth, very gently. She jerked and cried out, exploding beneath him in a series . . . Read more 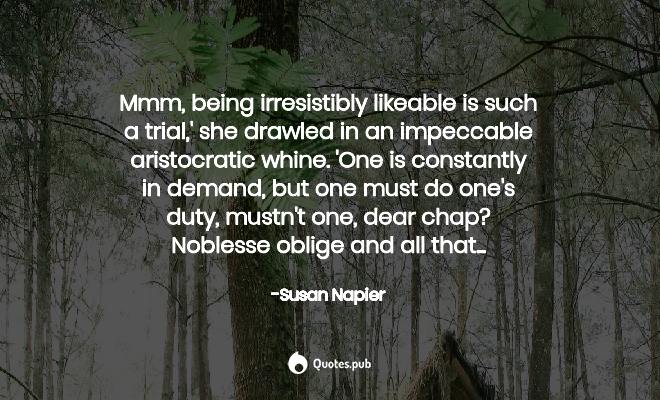 Mmm, being irresistibly likeable is such a trial,' she drawled in an impeccable aristocratic whine. 'One is constantly in demand, but one must do one's duty, mustn't one, dear chap? Noblesse oblige and all that...

Download
Don’t pretend you don’t want this,’ he warned savagely, shifting his stance so that he could palm the fullness of one breast, his fingers spreading to accommodate the lush ripeness overflowing the lace cup and contracting to massage the swollen flesh, drawing a ragged whimper fr . . . Read more