early childhood she had given her deepest trust, and which for half a century has suggested what she might do, think, feel, desire, and become, has suddenly fallen silent. Now, at last, all those books have no instructions for her, no demands—because she is just too old. In the world of classic British fiction, the one Vinnie knows best, almost the entire population is under fifty, or even under forty—as was true of the real world when the novel was invented. The few older people—especially women—who are allowed into a story are usually cast as relatives; and Vinnie is no one’s mother, daughter, or sister. People over fifty who aren’t relatives are pushed into minor parts, character parts, and are usually portrayed as comic, pathetic, or disagreeable. Occasionally one will appear in the role of tutor or guide to some young protagonist, but more often than not their advice and example are bad; their histories a warning rather than a model. In most novels it is taken for granted that people over fifty are as set in their ways as elderly apple trees, and as permanently shaped and scarred by the years they have weathered. The literary convention is that nothing major can happen to them except through subtraction. They may be struck by lightning or pruned by the hand of man; they may grow weak or hollow; their sparse fruit may become misshapen, spotted, or sourly crabbed. They may endure these changes nobly or meanly. But they cannot, even under the best of conditions, put out new growth or burst into lush and unexpected bloom. Even today there are disproportionately few older characters in fiction. The

Having a chronic illness, Molly thought, was like being invaded. Her grandmother back in Michigan used to tell about the day one of their cows got loose and wandered into the parlor, and the awful time they had getting her out. That was exactly what Molly's arthritis was like: as if s . . . Read more 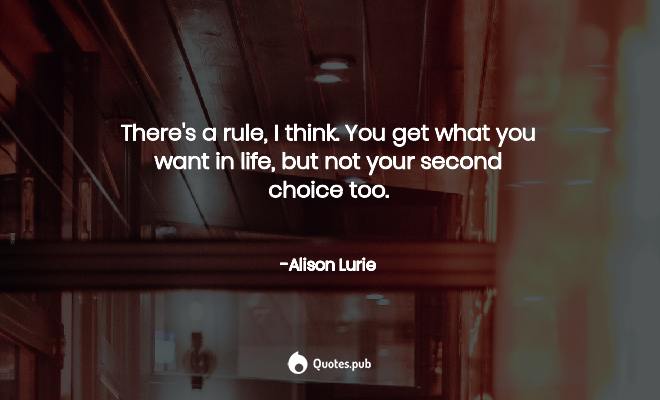 There's a rule, I think. You get what you want in life, but not your second choice too.

Download
The great subversive works of children's literature suggest that there are other views of human life besides those of the shopping mall and the corporation. They mock current assumptions and express the imaginative, unconventional, noncommercial view of the world in its simplest and p . . . Read more

Brian knows the affair is wrong. He's known from the moment Wendy first undressed in his office. But with her hot, wet tongue in his ear, and her taut, pink nipples straining against his starched white shirt, and with Mick Jagger's strident voice squawking about satisfaction on the ti . . . Read more ...you can't write well with only the nice parts of your character, and only about nice things. And I don't want even to try anymore. I want to use everything, including hate and envy and lust and fear. Though most tourists accepted the occasional comic misadventure, it was important to them that overall their vacation should be pleasant. When you spend money on a holiday you are essentially purchasing happiness: if you don't enjoy yourself you will feel defrauded. 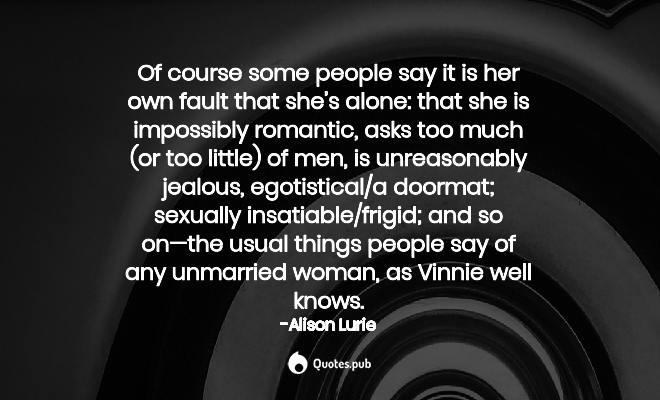 Of course some people say it is her own fault that she’s alone: that she is impossibly romantic, asks too much (or too little) of men, is unreasonably jealous, egotistical/a doormat; sexually insatiable/frigid; and so on—the usual things people say of any unmarried woman, as Vinnie well knows. 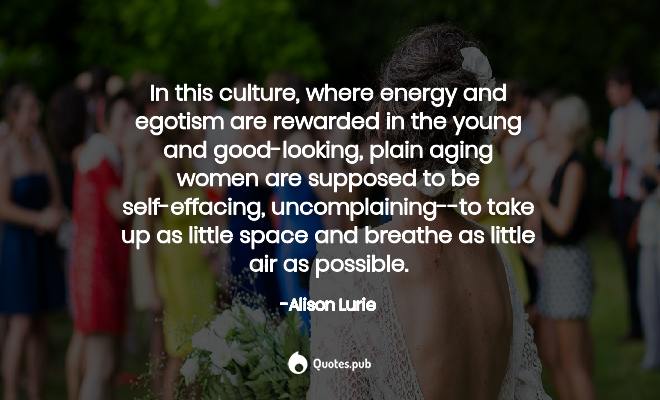 In this culture, where energy and egotism are rewarded in the young and good-looking, plain aging women are supposed to be self-effacing, uncomplaining--to take up as little space and breathe as little air as possible.