Almost unnoticed, in the niches and hollows of the market system, whole swathes of economic life are beginning to move to a different rhythm. Parallel currencies, time banks, cooperatives and self-managed spaces have proliferated, barely noticed by the economics profession, and often as a direct result of the shattering of old structures after the 2008 crisis. New forms of ownership, new forms of lending, new legal contracts: a whole business subculture has emerged over the past ten years, which the media has dubbed the ‘sharing economy’. Buzzterms such as the ‘commons’ and ‘peer-production’ are thrown around, but few have bothered to ask what this means for capitalism itself. I believe it offers an escape route – but only if these micro-level projects are nurtured, promoted and protected by a massive change in what governments do. This must in turn be driven by a change in our thinking about technology, ownership and work itself. When we create the elements of the new system we should be able to say to ourselves and others: this is no longer my survival mechanism, my bolt-hole from the neoliberal world, this is a new way of living in the process of formation. In the old socialist project, the state takes over the market, runs it in favour of the poor instead of the rich, then moves key areas of production out of the market and into a planned economy. The one time it was tried, in Russia after 1917, it didn’t work. Whether it could have worked is a good question, but a dead one. Today the terrain of capitalism has changed: it is global, fragmentary, geared to small-scale choices, temporary work and multiple skill-sets. Consumption has become a form of self-expression – and millions of people have a stake in the finance system that they did not have before. With the new terrain, the old path is lost. But a different path has opened up. Collaborative production, using network technology to produce goods and services that work only when they are free, or shared, defines the route beyond the market system. It will need the state to create the framework, and the postcapitalist sector might coexist with the market sector for decades. But it is happening." (from "PostCapitalism: A Guide to Our Future" by Paul Mason)

Topics : Postcapitalism Quotes PostCapitalism: A Guide to Our Future Quotes 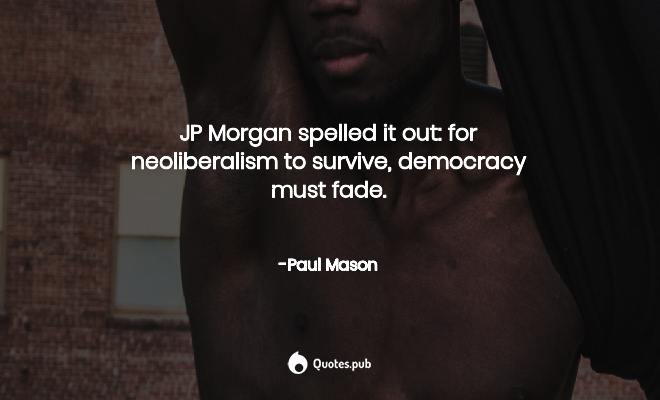 JP Morgan spelled it out: for neoliberalism to survive, democracy must fade.

Download
bargaining This stage is characterized by the non-BP making concessions in order to bring back the “normal” behavior of the person they love. The thinking goes, “If I do what this person wants, I will get what I need in this relationship.” We all make compromises in relationsh . . . Read more 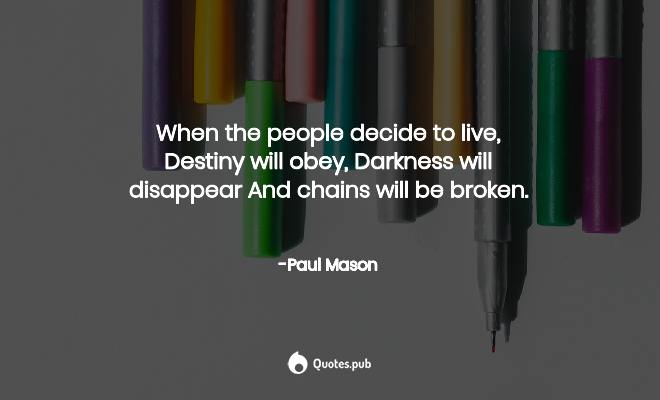 When the people decide to live, Destiny will obey, Darkness will disappear And chains will be broken. 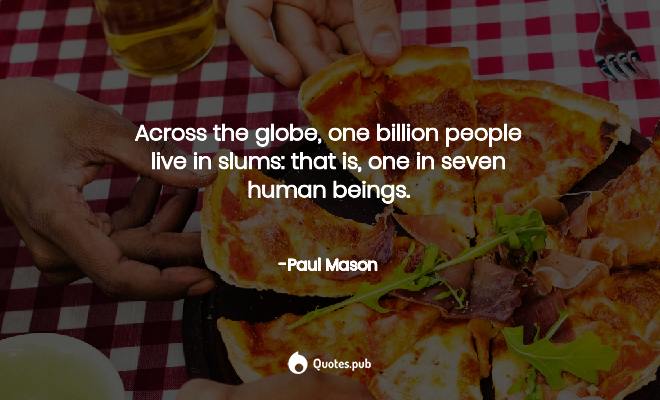 Across the globe, one billion people live in slums: that is, one in seven human beings.

Download
By this definition we are in the middle of a revolution: something wider than a pure political overthrow and narrower than the classic social revolutions of the twentieth century. Out of the very values and practices of free-market capitalism—individualism, choice, respect for human . . . Read more 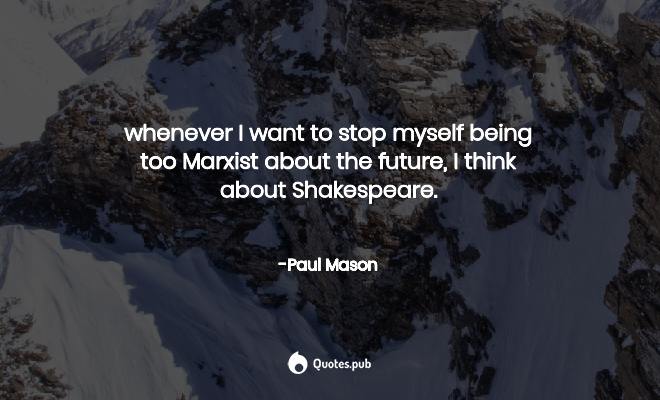 whenever I want to stop myself being too Marxist about the future, I think about Shakespeare.

Download
It appears - because it has been the case for twenty years - that every problem is solvable...that no matter how badly the world economy slumps there is a pain-free way out of it. Once the realization dawns that there is not, and that the pain will be severe, the question is posed tha . . . Read more 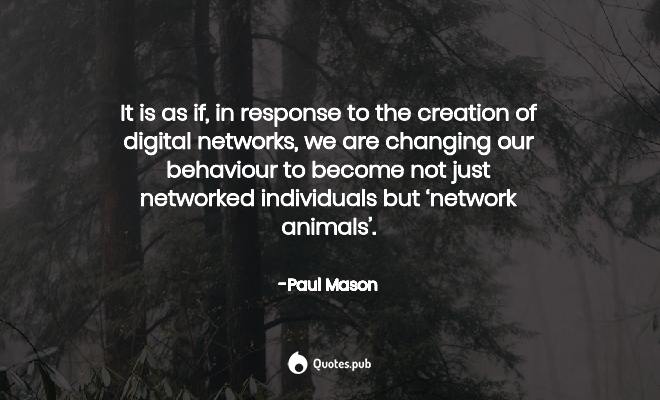 It is as if, in response to the creation of digital networks, we are changing our behaviour to become not just networked individuals but ‘network animals’.