Notebooks Of Pliny The Younger Books in Order

The Notebooks Of Pliny The Younger books have become so popular over the years that generation after generation, people keep going back to them.

If you're just starting with it and want a reading list, you're in luck. Here we list out all the Notebooks Of Pliny The Younger books in order; keeping in mind various factors like the publication year, reviews, its popularity among readers, etc. 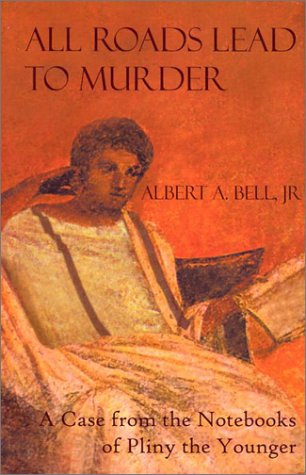 All Roads Lead to Murder

First-century Smyrna comes alive as the scene of a horrific murder. Pliny the Younger, Tacitus, and Luke, travelers in a caravan bound for Rome, become investigators when no Roman magistrates are available. Suspects abound: gamblers, arcane priestesses and Christians.

What is the secret of one of the victim'ss own slaves, a beautiful blond, and the German giant shadowing her? 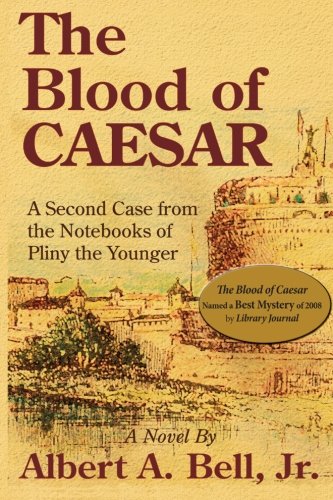 The Blood of Caesar

Named a best mystery of 2008 by Library Journal! Assigned by Emperor Domitian to search for blood heirs to the Emperor Augustus, Pliny and Tacitus seek solutions to layers of mysteries. Why is a humble workman’s death important to the ruler of Rome, and what connects him to Pliny’s household? How do Domitian’s suspicions relate to Pliny’s old friend and mentor? Is Tacitus’ father-in-law Agricola a villain, victim or savior? Like a sinister red line slashed through a carefully prepared manuscript, the legacy of Augustus marks the connections.

Will the answers save the peace of Rome, or mark its doom? Praise for the series: Outstandingly researched and laden with suspense, this journey into ancient Rome by history professor Bell could be one of the masterpieces of the historical mystery genre.

—Suzanne Crane, The Historical Novels Review Superlative job of leading the reader into his Roman world, ... A winner all around! —Margaret F. Baker, Past Tense, the publication of the Historical Mystery Appreciation Society Masterful blend of history and mystery.

... wonderful book. with splendid characters, vivid history and a fair and puzzling mystery. I heartily recommend it.—Barbara D’Amato, award-winning author of three mystery series, Past President of Mystery Writers Internationals and Sisters in Crime International Bell promises us a series, and this reviewer for one looks eagerly forward to the next installment! —Irene Hahn, Romahost, About. 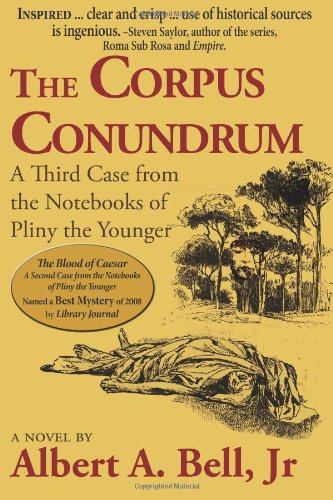 While out hunting, Pliny finds a man’s body. He appears lifeless, but Pliny cannot find a cause of death. He locks the body in a stable, but in the morning the body is gone. Strangers appear at Pliny’s door, claiming to be the man’s children. One sings siren songs and claims his “father” is immortal.

Another may be an empusa, a shape-shifting, blood-drinking monster. Bodies pile up: a fifteen year old murder, a faceless man floating in the bay, and the “lifeless immortal,” this time with his throat cut. Was he killed for his blood? Pliny and Tacitus must discover how the murders are connected to each other and to Pliny’s nemesis Marcus Aquilius Regulus. 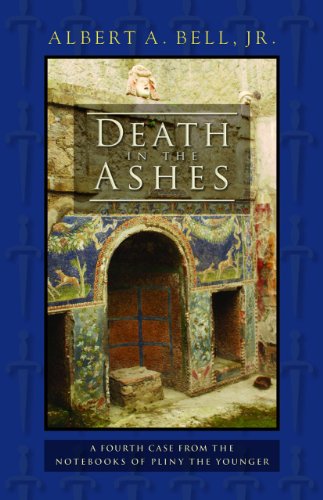 Death in the Ashes

A few years after the eruption of Mt. Vesuvius, where he lost his adoptive father and mentor, Pliny the Younger is asked by his friend Aurelia to help her husband Calpurnius, who has been accused of murder in Naples. He has solved previous crimes, but never before has so much time and distance elapsed before his arrival on the murder scene.

..nor has he carried so much emotional baggage. With the help of his wisecracking sidekick Tacitus, he now must investigate cunning plots by some descendants of Augustus, which include murders and babies switched at birth. One fortunate circumstance in Pliny's detective activities is that the hardened ash crust makes good impressions of hand- and foot-prints.

But now, for the first time, Pliny must swallow his phobias and ghastly memories and face a deadly challenge in the ruins of a buried villa. 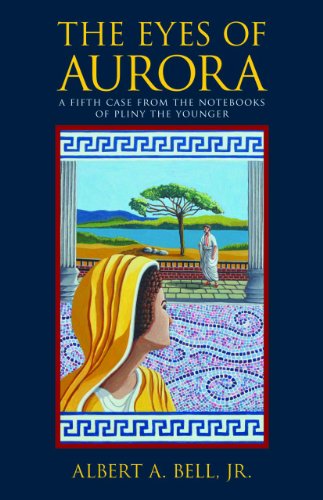 The Eyes of Aurora 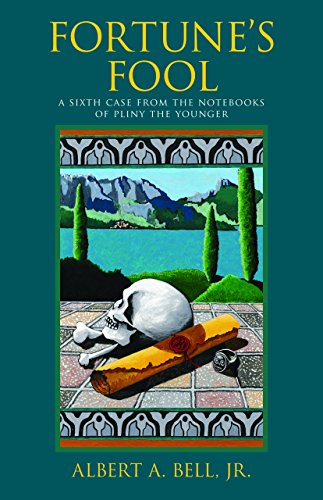 On the shores of beautiful Lake Como in Roman Italy, a Greek tragedy has taken place. Twenty years later, a skeleton falls out of a wall in Pliny's villa, bearing mute witness to family secrets and crimes.Pliny the Younger is intelligent about everything but women.

He agrees to his wife's and mother's wishes to marry off his lover, Aurora, to another slave, but neglects telling her until the wedding! To add to his problems, when building a wing onto his Lake Como villa, workmen discover a skeleton. As is Pliny's habit, he launches a scientific investigation of the crime, but soon receives anonymous warnings and threats to cease.

Then his wife, Livia, is kidnapped!- As in the earlier books, a glossary of Roman terms and a list of historic and fictional characters are included 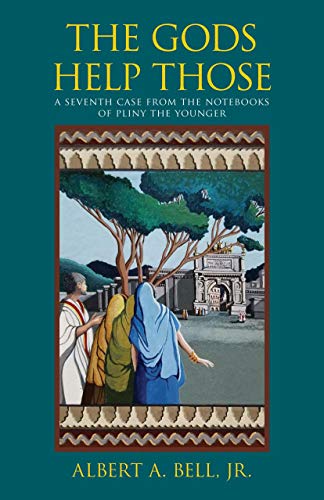 The Gods Help Those

Pliny the Younger hoped to improve relations with his unpleasant wife and her mother by investing in a warehouse on the Tiber with them. Now the building has collapsed due to heavy rains. Pliny discovers several dead people inside, including a man with a narrow red “equestrian” stripe on his tunic, indicating aristocracy.

He wasn’t killed by the cave-in, however, but by a knife wound in his back. When Pliny gives the body a forensic examination, he finds two more puzzling things: a circumcision (unusual in Rome), and thirty pieces of silver in his sewn-closed mouth.

To further complicate matters, Pliny’s servant and lover, Aurora, finds a live baby in the wreckage. What connection does the funeral of a consul have with these events? Queen Berenice of Judaea, the mistress of the late emperor Titus, soon enters the story with her sons―one of whom is an assassin, a member of the Sicarii.

He’s determined to avenge the defeat of his people and the destruction of their temple―no matter who might get in the way.... 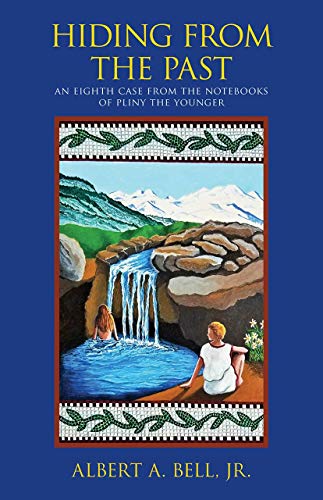 Hiding from the Past

Pliny joins his best friend, Tacitus, on a hurried trip to Gaul because of family illness. But Pliny and his lover, Aurora, along with their fellow travelers, are stranded by an avalanche in a remote Alpine village―the same one they’d visited ten years earlier as teenagers.

That time they’d tried to investigate a case of mysterious death, encouraged by his uncle, Pliny the Elder. Then, as now, they’re beset by dangers, both naturally and deliberately caused. Can they escape a second round of attempted murder?Albert Bell breaks new ground in this latest case from the notebooks of Pliny the Younger.

Some of the story is told in alternating flashbacks to a time ten years earlier than the other series books. And the setting is new: Transalpine and Cisalpine Gaul (Roman-occupied France and northern Italy). The flashback sections allow us to meet Uncle Pliny (the Elder) and Monica (his mistress, and Aurora’s mother) as living characters.

Some of the perils Pliny’s party faces are still with us in the 21st century (fire, avalanche, bandits) as are some of their pastimes (gambling and cheating at same). Enduring through the ages, of course, are both licit and illicit love.As in the earlier books, a glossary of Roman terms is included.

And that's the end of the complete list! Now that you have it - the next step for you is to of course purchase them and dive into reading Notebooks Of Pliny The Younger books. Worry not, we've done the tedious job for you and added amazon direct book links including AudioBook, Kindle, Paperback and Hardcover versions as applicable.